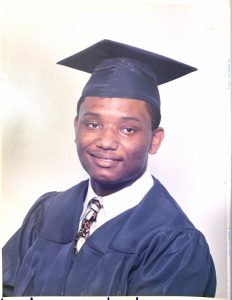 II Corinthians 15:58 Therefore, my dear brothers, stand firm.  Let nothing move you.  Always give yourselves fully to the work of the LORD, because you know that your labor in the LORD is not in vain.

David Arnold Buffington, born June 16, 1984 in Texas City, Texas, is the "special" (as described by almost everyone who knew him) child of Elijah "Lil Joe" Buffington and Brenda Buffington.  In 2003, David graduated from Life Christian Academy where he said, "I will be respected for who I am and why God made me" and "meet good Christian students."  He was a member of Second Baptist Church, and he spent the last few months of his earthly life preaching the Gospel of CHRIST in an unassuming but impactful manner.  He attended Pensacola Christian College after high school graduation.  David later became a certified HVAC technician and CDL operator.  David's employers included Sam's Club, American Airlines, and National Gas Company. Because GOD gave David the talent of navigation, we rejoice in knowing he is currently navigating in heaven.

However, his greatest talents and gifts are humility, selflessness, meekness and being a peacemaker. "David is a very special person" and a gift from heaven.  How blessed we are that GOD granted David's relatives, friends, associates, and strangers thirty-six years of witnessing the true meaning of his talents, which are exemplified in how the HOLY SPIRIT lives through him.  For he is a true example of how we all should embody our HEAVENLY FATHER by living a life void of confusion and grounded in humility.

Condolences may be sent to the Buffington family in care of Jeter Memorial Funeral Home at www.jeterfuneralhome.com.