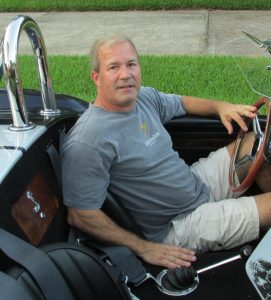 Craig Phillip Allen, 58, of Houston, Texas peacefully passed away on Monday, November 30, 2020.  He was born to Bobbie Lee Allen and Ann Francis Bulna Allen at Cherry Point Marine Corp Medical Hospital on May 7, 1962.  He was raised and grew up in Piedmont, Missouri and graduated High School in 1980.

Craig's acumen and life force were immeasurable.  He flew his first plane solo in Piedmont when he was 16 years old when his peers could not yet drive an automobile.  His drive drew him to the heavens for reasons we cannot comprehend.  His love of flying called upon him to drop his earthly desires and pursue a life in the air above us as a professional pilot.

Following his graduation from North East Missouri University, he began his career with Glaxo Pharmaceutical where he excelled in all his professional career.

After years and years of exceptional pilot service, Craig became the captain of his craft and a role model for all who wish to reach their maximum potential.

Craig is survived by his loving wife Patricia Miller; his big brother Jess Cole Allen and his wife Kristina Allen; his little brother Robert Lee Allen and his loving wife Imela Lim Allen; his little sister Dawn Westmoreland; his nephews Jesse Allen and his wife Sara Allen and their beautiful New Allen, his grandniece Lillyanna Allen; his nephew Zachary Allen; his niece Alicia Allen and niece Elizabeth Ann Allen, daughter of Robert Lee Allen and Elizabeth's grandson Blayze Allen.  He is also survived by his aunts and uncles Dixie Tooke Rawlins and Fred Rawlins, Boyd, Mitted and Bradly, and his great Uncle Harry.  Carol and Eddie Davis; his cousins Kelly Bearden and her daughter Hillary, Melinda Bearden, Will Davis, Travis Davis, Robin Patterson and Joan.  He is also survived by Patricia's parents, Mr. Jim and Kay Miller, who's help in this is immeasurable. His friends, colleagues and co-workers and family members not listed here are not forgotten, along with his great accomplishments, there are far too numerous to mention in this list.  These words can do no justice to all his friends and family by these few words.

There will be a memorial service in the near future in Houston which will be public and will be announced to the entire world.

He will never be forgotten.

Condolences may be sent to the Allen family in care of Jeter Memorial Funeral Home at www.jeterfuneralhome.com.