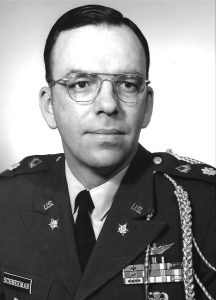 "The Colonel" graduated from Fordham University and before launching his life, and deciding to get his 2-year military service obligation out of the way, he joined the United States Army in 1956.  Stationed in Germany, he met the love of his life while she was there visiting her uncle, Major James Talent, who happened to be Doug's commanding officer. He married Helen Louise Kutz in 1958 and two children quickly followed.  Invited to attend Officer's Candidate School, he ultimately found his passion in Army Aviation.  This led to a career that forever made his heart beat fast.  His training as an officer became part of his DNA and defined who he was for the rest of his life.

Doug Sr. was a prince of a man and a leader of leaders.  When he walked in a room, his presence filled the space.  A  kind and talented problem-solver, he had an endearing, on-point sense of humor and no patience for conversation that was critical of others.  Doug carried himself with dignity and no arrogance.  And he never let an opportunity pass to put the well-being of others first and foremost.

During his service to his country, "the Colonel" was awarded a number of medals and commendations, including the Legion of Merit (3rd highest military award) two Bronze Stars (5th highest), and of particular note, the Distinguished Flying Cross.  This is the Army's 4th highest military medal and it was awarded in recognition of his performance above and beyond the call of duty after having been selected by the Army, Navy and Air Force to command the joint military's top secret mission in Vietnam 1968 to experiment with the concept of "low observable" reconnaissance aircraft, which is now known as "stealth aircraft."  The mission, called "Operation Prize Crew" (QT-2PC) was dangerous and ground-breaking in military history, and the United States Military's current expertise at stealth aircraft began with a mission led by Colonel Douglas Schneeman.

Doug Sr. was as dedicated to and protective of his family as he was the country.  He is predeceased by his parents, Charles Joseph and Grayce Anna Schneeman, his wife Helen Louise Schneeman, and his daughter Karen Marie Schneeman.  Also predeceasing him are his sisters Dorothy and Marilyn, and brothers Charles Jr. and Donald.  He is survived by the children who adore him, daughter Kathie O'Donovan and son Douglas Schneeman, Jr.  He is also survived by his treasured grandchildren Bethany Paige O'Donovan, Joseph Alexander O'Donovan, and Grace Analiese O'Donovan.  It was a profound privilege for his surviving family to care for this amazing man during his last few years.  The family wants to thank Brightstar Care of Friendswood for the caregiving they provided during his last several weeks of life, especially Lillian Washington who, with deep compassion, treated him with such dignity and respect.