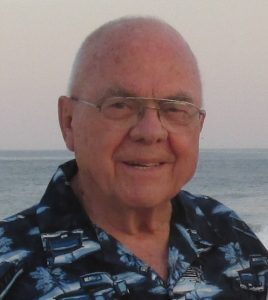 Clarence Wesley Casey, Jr. 95, passed on to Heaven from natural causes on July 12, 2020 at Atria Senior Living in Friendswood, Texas.  Clarence was born on January 1, 1925 in Pleasants, West Virginia to Clarence and Pearle Casey, Sr.  As the youngest of six children he graduated from High School in St. Mary's, West Virginia in 1942 and, in 1943, was called to serve in the Army, Av Ordnance Company.  He served overseas and upon his return in 1945, he married his high school sweetheart, Virginia Lee Medley.

In 1946, Clarence was discharged from the Army and returned to West Virginia where he attended Marietta College.  He moved his family to Texas in 1948 where he began his career with the Union Carbide Corporation.  In 1950, Clarence was called back to serve in the Korean Conflict, as a Battalion Sgt. Major, Edgewood Arsenal in Maryland for two years and then returned to Texas in 1952.  Four years later Union Carbide relocated his family to Torrance, California, but seven years later returned to Texas.  Clarence served in various capacities but spent most of his career in the Labor Relations Group of the Employee Relations Department where he handled the negotiations with the local unions as well as those located in Marietta, Ohio, and Ponce, Puerto Rico.  In 1978, Union Carbide moved Clarence and Virginia to Puerto Rico, back to Texas in 1980 and he retired in 1983, completing 35 years of service.

Clarence and Virginia bought their first weekend place in Polk County in 1968 and, after falling in love with the area, built a retirement home.  They joined the First United Methodist Church in Livingston and Clarence served in many capacities at the church including helping to establish a Sunday School Class and serving as chair for the Administration Board, Finance Committee, Pastor Parish Committee, and the Lay Leadership Committee.  Clarence was an active member and supporter of the Livingston Rotary Club, having been a twice recipient of the Paul Harris Fellow Award and a member of the Masonic Lodge for over 57 years.

A very special thank you to the staff of Atria Senior Living and Faith Community Hospice who cared for Casey this past year with love and grace.  A private family graveside service will be held at Livingston Forest Hill Cemetery on Thursday, July 16, 2020.  In lieu of flowers the family prefer donations be made to the Friendswood United Methodist Church.

Condolences may be sent to the Casey family in care of Jeter Memorial Funeral Home at www.jeterfuneralhome.com