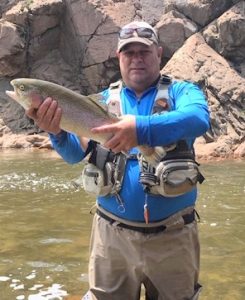 Christopher Lawrence Bruton was born July 30, 1965, to JoAnne and Larry Bruton of Durango, Colorado.  He passed away on Friday, June 4, 2021, at age 55, from multiple complications following a surgery to remove cancer.  He put up an admirable fight in his effort to return home to his family.

Chris grew up in Durango, Colorado, and graduated from Fort Lewis College with a degree in American History.  In 1992, he moved to Houston, Texas, with his future wife and began his coaching and teaching career of 28 years.  He coached football, baseball and golf, and most importantly to him, his two sons.

Coach Bruton embraced life, had a keen sense of humor and no one ever had to guess where he was coming from.  He led his life as a coach in every sense of the word.

His life will continue on through his wife of 24 years, Loree, and two sons, Tyler (19) and Adam (17) of Pearland, Texas.  He is survived by his mother, JoAnne Bruton and brother, Jay Bruton, of Durango, Colorado, and Sister, Aimee Mannering, of Lakewood, Colorado.

Per his request, his ashes will be scattered by his immediate family on Father's Day over the river where he loved to fly fish in Estes Park, Colorado.