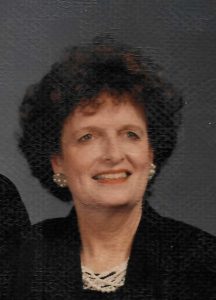 Born on October 17th, 1934 in a ranch house near the town of Hyannis in the Sand Hills of Nebraska, she was preceded in death by her beloved husband Norbon F. (Buddy) Jones, Jr., married 55 years, her brother, David C. Ogle, and her parents, Clay Bement Ogle and Nedra Vance Ogle.

At age three, she moved from Hyannis, Nebraska to Old Ocean, Texas with her parents and brother to live on the W. Sears Ranch between SH 35 and Black's Ferry Road. She graduated Valedictorian from Sweeny High School in 1952 and attended Wharton Junior College before marrying the love of her life, Norbon "Buddy" Jones, whom she met on a blind date. Cecelia and Buddy were married on June 7th, 1953 and both were whisked off to the U.K. where Buddy was serving in the U.S. Army during the Korean War.

While in school in Sweeny, Cecelia took on a love of dancing, and at the age of fourteen had her own dance studio, teaching dancing to others. This began a long part-time career as a dance instructor, holding dance classes for tap, jazz and ballet in Newgulf, Sweeny, West Columbia and later, Alvin, Texas. Many came to know Cecelia through her dance classes and Spring dance recitals.

Cecelia began her second career after completing her college education earning a B.S. from the University of Houston in 1972 and later a Master's in Education in 1980. She taught several grade levels while at Mark Twain Elementary in Alvin ISD along with her passion, music appreciation, from 1972 until retirement in 1992. While at Mark Twain she was twice named Teacher of the Year and served in many volunteer roles on behalf of teachers, including delegate to the National Convention of the NEA.

Cecelia believed strongly in giving back to others through service, and demonstrated this commitment through participation in various organizations including 8/40, Rainbow Girls, past President of American Legion Auxiliary, Post 129 in Alvin, American Legion Auxiliary Department of Texas Music Director, Director of Brazoria County Fair Queen Contest and Talent Show, Alvin Retired Teachers Association, Texas Bluebonnet Girls State Chairman Post 129, and Girls Nation.  She was also a member of Delta Kappa Gamma and a Sunday school teacher at First United Methodist Church Alvin. Her love of music and teaching was instilled in her grandchildren, with many becoming accomplished musicians and teachers thanks to "Granny's" positive influence. Some are old enough to remember Granny participating in her mother Nedra's beloved Sweeny Kitchen Band and as director of the Bell Choir at FUMC Alvin.

Upon retirement Cecelia began a third career looking after her husband Buddy, traveling and doting on her grandchildren and later, great-grandchildren. It was during this period that Cecelia actually had time to become a great cook (comment from her kids!) since her first two careers had her rushing madly around to meet schedules, leaving little time to prepare meals. Hence her cooking had a reputation of being a little on the "crispy" side!

A graveside funeral will be held on June 11th, 2020 at 2pm at Evergreen Memorial Cemetery in Wharton, Texas. The family invites all who knew Cecelia and wish to attend. Please be aware that facemasks should be worn along with practicing social distancing while at the cemetery. Memorials in lieu of flowers should be sent to First United Methodist Church Alvin, the American Legion Auxiliary Alvin Post 129 or Friends of Girls State.

The family wishes for Cecelia's family, friends, and students to remember her smile, dedication and love of teaching music and dance to so many people throughout her life. We were all wonderfully blessed to have known and experienced her love for others.

Condolences may be sent to the Jones family in care of Jeter Memorial Funeral Home at www.jeterfuneralhome.com.