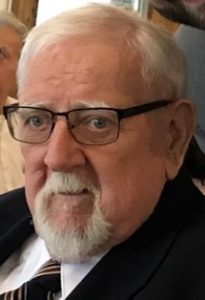 Bernard Carl ("Ben" or "Bernie") Piotrowski, 89, of Friendswood, Texas, passed away October 11, 2020 at his daughter's home in Friendswood. He was born January 26, 1931 in Cleveland, Ohio to Bernard Anthony and Anna (Biesiada) Piotrowski. Bernard married Doris Joan Knickrehm on August 8, 1953.

Bernard was a graduate of Cathedral Latin High School in Cleveland, Ohio and was drafted in the United States Marine Corps.  He served at Cherry Point as a radar specialist and on the bowling team during the Korean War.  He worked in the elevator industry for 40 years, including time as union president, maintenance superintendent, and an instructor in the apprenticeship program in retirement.  His family joked, "It had its ups and downs."   The years included many re-locations with his growing family–from Cleveland, Ohio to Columbus, Ohio to Indianapolis, Indiana, to Toledo, Ohio, to Livonia, Michigan, to St. Louis, Missouri, then onto Houston, Texas.  He was active with his sons in the Boy Scouts of America and was a member of the Knights of Columbus.  His working years included time with Jeep in Toledo and he was always delighted to see the many Jeeps in Texas.    In retirement, Bernie and Doris moved to Galveston, Texas, where they were active in the church and volunteered with the Galveston Outdoor musicals.   Bernie immensely enjoyed performing as Santa Claus during the holiday season and making homemade sausage during the holidays.  After tiring of the tropical storm season, Bernie and Doris moved to Friendswood to be closer to their family.

Bernard was preceded in death by his parents and brother, Robert Piotrowski.

Due to the pandemic, private services for family only will be held October 16, 2020.

In lieu of flowers, the family requests memorial contributions are made to the Mary Queen Catholic Church Food Pantry at https://pushpay.com/g/maryqueencatholicchurch or to 606 Cedarwood Dr., Friendswood, Texas, 77546.