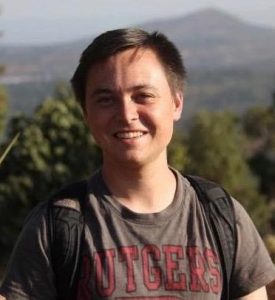 Alexander Spaulding Hobbs, awesome son of Chuck and Tracey Hobbs, little brother of Charlie Hobbs, ended his life of 27 years in Webster, Texas, on or around September 9, 2020.  He was an ever-present source of happiness and humor to those around him — even as he privately struggled with the anxiety and pain with which, in the end, he decided he could no longer live.

Alex was born on September 6, 1993 in Voorhees, NJ and grew up in nearby Gloucester Township.  He was a happy, kind and funny kid, traits that he would carry into adulthood; qualities that made him easy to love.

Alex was also a good student.  He was smart, but also hard working.  He graduated first in his class at Triton High School and earned a Presidential Scholarship to Rutgers School of Engineering.  Alex loved his years at Rutgers and the many friends he made at RU.  After graduating in 2016 with a BS in Mechanical Engineering, he continued his education at Stanford and received his MS in Aeronautics and Astronautics in 2018.

Alex began his career at Boeing in Los Angeles working in the rotational program on satellites.  Though he was very fond of his colleagues there, his dream was to work at NASA.   Alex had enjoyed a summer internship with the space center in Huntsville, AL, where he worked on a solar sail, participated in space camp, went white water rafting and jumped out of a plane.  Afterwards, he was hooked.

In mid-January, 2020, Alex's dream came true.  He landed a job in Houston at NASA's Johnson Space Center.  Despite a pay cut, a lease in LA that couldn't be broken. and a definite change of scenery, he jumped at the offer.  In March, Alex packed up his things, hopped in his convertible BMW, and enjoyed a scenic and fun filled ride to Texas.  He only went into work one day before the pandemic resulted in the necessity to work from home.  Still, Alex was excited to be working on the Artemis program that would soon land another man on the moon.

Alex spent much of his spare time "gaming".  He loved video games and developed some of his closest relationships that way.  Alex also loved Flyers hockey and enjoyed seeing them play in different arenas around the country.

Kind and big hearted, Alex volunteered with children in Camden every Saturday through high school.  His passion in college became Engineers Without Borders, where he worked on water access projects in Camden NJ and Tanzania, Africa.

Along with his parents and brother, Alex is survived by his Aunt Teri and Uncle Bob (Gatanis) and Aunt Karen and Uncle Brian (Hobbs).

Alex made us better people.  In his goodbye note, he said he loves us all.  He's sorry.  And he wants us "to be kind to others at every opportunity.  You know not their lives."  He didn't have a selfish bone in his body.

A virtual memorial service will be held at a time to be determined.  In lieu of flowers, please make donations in Alex's memory to Engineers Without Borders, Rutgers Chapter at

"The Lord is close to the broken hearted and saves those who are crushed in spirit."

Thanks for an amazing 27 years.  We'll love you forever, Alex.

Condolences may be sent to the Hobbs family in care of Jeter Memorial Funeral Home at www.jeterfuneralhome.com.