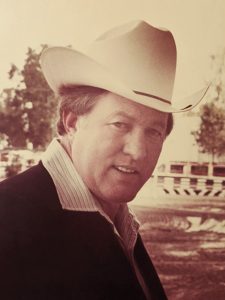 Al graduated from Alvin High School in 1955 and continued his education at Rice University where he received a bachelor's degree in Physical Education, while also playing college football and attending rodeos.

Al married the love of his life, Edwina Charlene Moore on June 18th, 1959. They were married 61 years. Al started his career at a young age assisting his parents at the Martin Funeral Home in Alvin. In 1960, he began ranching for the Moore Ranches in Fort Bend County. Al went on to work as a home developer, an insurance agent, and an entrepreneur all before acquiring T&L Lease Service in 1970 which he owned and operated until his passing. Al had a life-long passion for ranching. He also enjoyed fishing, quail hunting in south Texas, and working cattle. Al, always supporting his family, became very involved in the horse show world. He was appointed to the board of the Texas Hunter & Jumper Association, the United States Equestrian Team, and the American Horse Show Association. This combined his love for his family and horses. He was adopted by many as their horse show "dad" and known by most as "Cowboy". Al and Charlene loved to dance. They were lifelong members of the Sarabande Dance Club.

Al was preceded in death by his mother, Ella Becker Martin, and his father, Alex Lee Martin Jr.

Due to current conditions, the family will hold a private funeral service. Funeral arrangements are being handled by Jeter Funeral home.

In lieu of flowers, memorial gifts may be designated online to the Owl Club Athletics Fund of Rice University at giving.rice.edu or UTHealth at giving.uth.edu/memorial.

The family of Alex L. Martin, III wishes to thank Carmen and Simon Galvan, Delores Bowman, and Mike Hanson for their loving care in the final stages of his life as well as the many friends that made such an incredible impact on his amazing life.